MAC Cosmetics has released makeup inspired by the Sims, but die-hard fans and beauty enthusiasts alike are beyond unimpressed with the product.

On Monday, the Canadian beauty brand announced it had released a nine-shade eye-shadow palette inspired by the life-simulation game franchise. MAC Cosmetics shared a photo of the $32 product on Instagram and said its nine shades can help fans re-create “all the looks you love in the game.”

Shortly after the reveal, however, fans of the Sims questioned why the product’s neutral aesthetic doesn’t match that of the vibrant game. Makeup fans also criticized the palette, and expressed concern that MAC Cosmetics has seemingly repackaged old products in new boxes.

“JUST DROPPED 💚!” MAC Cosmetics wrote in its Instagram post about the palette. “Finally, you can twin with your Sims IRL with the limited-edition M·A·C Starring The Sims Eye Shadow x 9 palette. Swipe right to see how you can create all the looks you love in the game – in real life.”

The beauty brand also noted that the product is being sold exclusively online to US customers only.

“This is a gorgeous neutral palette but really misses the mark on the Sims brand,” one Instagram user wrote in response to MAC Cosmetic’s Instagram post. “Nothing about this feels Sims-inspired.”

The beauty brand responded to such comments by saying that the Sims and MAC Cosmetics “have always been about inclusion and creating a fun interactive environment that allows you to be your true authentic self.”

“We wanted to offer a versatile palette for everyone, whether you are a makeup beginner or total expert, that easily allows you to go from natural to glam in one swipe,” the brand wrote to numerous Instagram commenters. “Plus, it perfectly complements the 12 diverse interchangeable looks created for The Sims that suit all face shapes and skin tones. Now you and your Sims can wear M.A.C!” 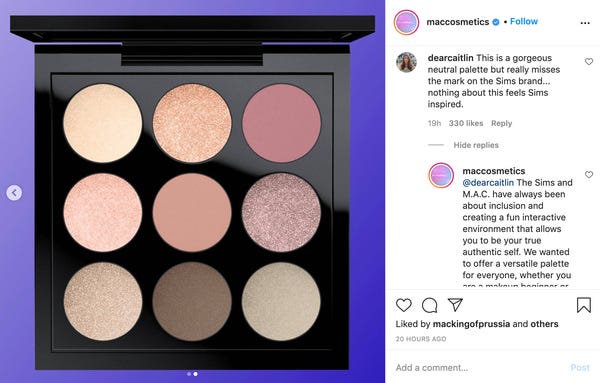 MAC Cosmetics’ statement seemingly referenced the brand’s previous collaboration with the Sims franchise. In 2020, the brand’s director of makeup artistry Romero Jennings created 12 virtual makeup looks that can be applied to characters in the Sims 4 video game.

The virtual designs were inspired by real MAC Cosmetics products, all of which are listed on a Sims-themed page of the brand’s website.

As some beauty fans pointed out, however, the real-life eye-shadow palette likely won’t suit all skin tones.

Because MAC Cosmetics frequently collaborates with famous celebrities and non-makeup companies like Disney, fans of the brand are accustomed to buying products with themed packaging, colors, and shade names. The Sims-themed product, however, lacks all but themed outer packaging.

When one Instagram user asked if the blue color scheme and Sims logo are featured on both the outer box and actual palette, MAC Cosmetics replied by saying that the external cardboard is the only one with “deco packaging.” 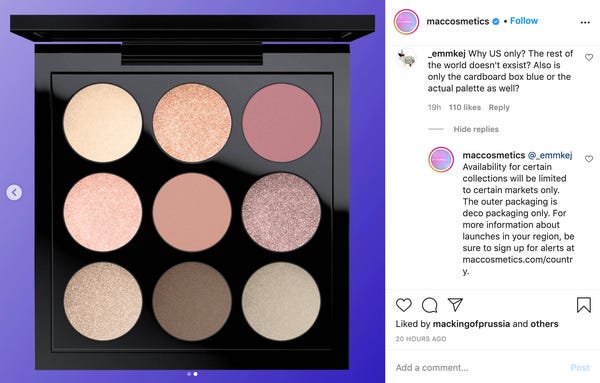 On Twitter and Instagram, numerous beauty enthusiasts noted that the lack of themed shades and packaging seems to be the result of MAC Cosmetics repacking it’s Solar Glow Times Nine palette — which features the same shades as the Sims-themed palette — in new boxes.

Not only are the shades identical in appearance, but they’re also placed in the same layout and have the same names — which do not reference the Sims.

The Solar Glow Times Nine palette was seemingly first sold by MAC Cosmetics in 2017 as part of the brand’s Eyes on Mac anniversary collection. Multiple beauty blogs reviewed the product at the time and shared photos of it online.

Though the eye-shadow palette still appears on websites for brands like Dillard’s, it’s no longer available to purchase. It’s unclear as to when the product stopped being sold.

Representatives for MAC Cosmetics, Electronic Arts, and the Sims did not immediately respond to Insider’s request for comment.